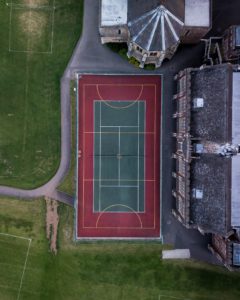 While tennis court construction has a global standard that is universally recognized, many may be surprised to know that there is quite a history to how we got the tennis court that we know today. The crew at Taylor Tennis Courts strives to honor this historied sport by providing homeowners and commercial entities with quality sports courts made by experienced craftsmen. No matter your needs, Taylor is sure to have skills and know-how necessary to provide you with a beautifully installed court every time.

Did you know that tennis courts were not always rectangular? The evolution goes as follows:

The original version of the game had complex rules and unique techniques. While “real” tennis still exists today, these courts are not as well-known as their modern cousins. There were no ideal dimensions for the court, and four walls covered it. Three of the four walls would have roofs on them. Below these roofs, which were called penthouses, were galleries were spectators could watch matches. Ceilings were tall so that one could easily play lob shots, and the net was sagged in the middle, around 5 feet high at the ends, and 3 feet in the middle.

These large courts were asymmetric and quite different on either end, and very few “real” tennis courts still exist. The only court in Paris that is still in use, for example, was built in 1908. Hampton Court in England was made in 1625 and is one of the only original courts for real tennis that is still used to this day.

One of the first breakthroughs in tennis came in 1874 from Major Walter C. Wingfield, who came up with a concept quite similar to our modern idea of tennis. At the time, it was called lawn tennis. Initial courts for this were constructed in the United States and were hourglass-shaped. Two to four players would play on the court, and the net varied from 5 to 7 feet in height. Later on, the rules and dimensions of the court were changed and developed further. To this day, however, Wingfield is still known as the father of modern tennis.

The All England Club, or AEC, developed the first rectangular tennis court and held the first Wimbledon tournament in 1877. The rules for this game were almost the same as the tennis we know and love today. The main differences were that service boxes were 26 feet long, and the net height was 5 feet.

Tennis in the Present Day

In 1882, shortly after the AEC’s introduction of the Wimbledon tournament, dimensions for tennis courts were standardized. The current measurements now include a 78-foot-long court that is 36 feet wide for doubles and 27 feet wide for singles. The alley is 39 feet long, and the service box is 21 feet in length, with symmetric opposite ends. The net is 3 feet six inches at the posts and 3 feet at the center.

Whether you want tennis court construction from experienced professionals with decades in the field, or you want other sports courts constructed for your property, Taylor Tennis Courts is ready to get the job done for you. For more information about our court construction services, or to get a no-obligation estimate, you can contact our team today at (800) 558-3664.