Get a Fresh Coat of Concrete Basketball Court Paint From Taylor 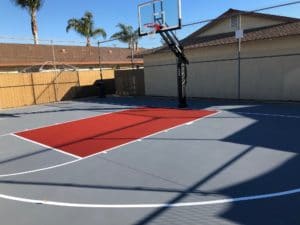 While players may not think about it often, one of the essential components to any basketball court is proper striping. With time and use, colors fade, and it may be time to look for professionals who can provide concrete basketball court paint that is long-lasting and vibrant. Fortunately, there is a team that can help at Taylor Tennis Courts. We have worked since 1980 with homeowners and businesses alike to provide high-quality sports court striping, installation, and resurfacing that owners can enjoy for years to come.

Here’s a breakdown of the history of the three-point line:

The first instance of this line appearing on any basketball court appeared in 1961, a full 70 years after Dr. James Naismith invented the game. While this was meant to increase excitement, it didn’t quite catch on at the time. The three-point line wouldn’t get another chance until 1967 when the American Basketball Association (ABA) instituted the three-point line from its inception. This was a move implemented to compete with the NBA, and it worked to great effect. This play option excited fans and build an engaged audience. The NBA and ABA eventually merged in 1976, but the three-point line was not included in this merger.

Whether you’re looking for fresh concrete basketball court paint, or you wish to have a new indoor basketball court installed in your facilities, Taylor Tennis Courts has everything you need to get a quality installation that will last you for years to come. For more information about our sport court services, or to get a no-obligation estimate for your needs, you can contact us at (800) 558-3664 today.